DELIVER US FROM EVIL

​​​​​Deliver Us From Evil provides
​​ Paranormal Assistance, The Rite of Exorcism, plus
Counseling Services​ at no cost to our clients.
​We are committed to providing you help in your circumstances without outrageous expenses or unnecessary costs. We maintain a Biblical standard of helping those in need.
We recognizes that incidents of unknown origins or paranormal phenomenon
​can be frightening.
​Whether the phenomenon is normal or paranormal, the goal of each case is to alleviate these fears by providing information to our clients to help them understand what they are experiencing.


"Helping The Residents of Texas with Paranormal Assistance."

If you think you have experienced paranormal activity,
​ please fill out the application form,
​or send us an email directly.
​
​

Signs you may need help

​ Sounds
Phantom sounds can take the form of voices, music or repetitive noises that occur at regular intervals. The characteristic sound of footsteps in the night, laughing, crying or music that occur at regular intervals are attributed to a residual haunting. Intelligent or inhuman spirits may create sounds to get your attention or to communicate with you in some way. You may experience the sounds of knocking, tapping or scratching in the wall or loud crashes and bangs with no identifiable cause. Each is characteristic of specific types of hauntings.

Temperature
Cold spots with no physical reason often accompany hauntings. The theory is that spirits need energy to manifest and draw energy from the surroundings, resulting in an area colder than the surrounding air by as much as 20 to 40 degrees. The cold spot seldom remains in one area for a prolonged period and may precede a manifestation or other paranormal activity.

Animals
​Animals behaving strangely: people are not seemingly alone when it comes to experiencing the paranormal; many animals living in haunted locations or locations where activity occurs also experience paranormal activity.

illness
Physical illness with no medical relief or reason: In some cases, individuals will report having the sudden onset of rare illnesses, or un-diagnosable ailments after moving into a location that is paranormally active. Lesser signs of illness are also reported and include sleep disturbances, fatigue, and general malaise with little or no relief while in the location in question. When the individual is free of the location however, the latter symptoms either
fade or ​disappear all together.

​​He or She will have strong, inner compulsions to do bad things that are not in their normal behavior patterns like having bad thoughts of suicide and murder.
​ Can also have very strong addictions to things like drugs, alcohol, and pornography.
​​​Inability to be in contact with spiritual or religious items, for instance, one may incur an aversion to touching a crucifix or going to the temple or church.
​Unnatural sexual desires.
Abnormal fascination with the occult.
Abnormally strong feelings of rage and hate in them that are not a part of their natural personality and makeup.
​Demons can also transmit heavy feelings of despair, hopelessness, and depression.
​Periods of having lost all sense of time from minutes to actual hours, and can sometimes end up somewhere not knowing how they got there.
Also regularly doing things for which they have no memory of actually doing.
May have tried other kinds of treatments and medications from other psychologists and psychiatrists with no real help or relief for the symptoms.
Hard time praying and reading from their Bibles.
Can also have an actual revulsion of the Bible to the point of wanting to try and
​tear it apart or burn it.
Demons seek to torment, both physically and mentally, Demons seek to place people in bondage; to keep them enslaved to certain sins, addictions, and destructive behaviors.
​

​Stephen Bridges Jr. has over 12 years of experience and is an expert in Demonology, Paranormal phenomenon, the Occult and the Rite of Exorcism.
His experience and education makes him one of the most consulted Demonologists in cases dealing with the demonic and paranormal phenomena​.
​In 2014, he opened his own deliverance ministry in Texas, a ministry specializing in helping south Texas & the residents of ​San Antonio,  San Marcos, New Braunfels,  and Austin with demonic infestation, oppression, and possession, as well as paranormal assistance.

​In 2015, he started performing exorcisms over Skype​.
​ He has had clients from Europe, Africa, Asia, and South America.

In 2019, Mr. Bridges became certified as a theologian, and went into counseling to support those who suffer from demonic attacks and ritual abuse.
​
In 2020, he furthered his education by studying the occult at Yale University.
​He still does get involved in cases dealing with the demonic and paranormal phenomena, and will never turn down enquiries for help.​ 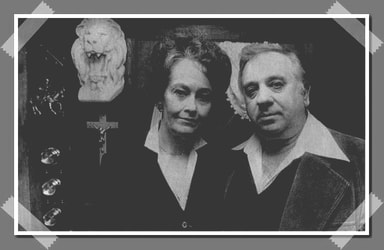 Did you know facts
Demonologist Stephen Bridges Jr.
Completed studies in Demonology at three different schools
and one was the NEW ENGLAND SCHOOL OF DEMONOLOGY
​                founded by Ed & Lorraine Warren.

​​Deliver Us From Evil 2020
​  ​​This website is protected by copyright law and is not to be copied.
Please do not duplicate or redistribute in any form without the expressed written consent of
​DELIVER US FROM EVIL